FROM HUMPBACK WHALES TO HUMPBACK DOLPHINS

In Skjálfandi Bay, humpback whales are seasonal visitors and one of the most common species we encounter on our tours. They head north towards Icelandic waters in early spring, eager to return to their feeding grounds. Then in late autumn or early winter, most of them will leave again and head back south towards warmer, tropical waters. That is the time of the year in which also many of us (among the crew) will spread out, either to their home countries or to travel the globe.

Thereby, it probably isn't surprising that for many of us the whale-world doesn't end by leaving Húsavík, but expands to places all over the world:

As for myself, I decided to return to South Africa this winter and show my mother the beauty of the country, which I first visited three years ago. Clearly, South Africa is a paradise for any animal lover, and whilst we encountered all kinds of animals, including the big five, during the days we spent on safari in Kruger National Park, also the two oceans were ready to give us an insight to the world of its inhabitants. We boarded a small speed boat on a beach in Plettenberg Bay (a few hours' drive from Cape Town along the south coast). A tractor approached us to pull the vessel in the water and just minutes after we had started to sail, a pod of bottlenose dolphins surrounded us. They were playful and curious and kept us entertained for a while.
At some point however, it was time to leave these adorable creatures behind and we continued our travel along the Robberg Peninsula Nature Reserve. As we moved on, we came across a colony of African Fur Seals whilst scanning the horizon for sights of a whale. It wasn't really whale season, which we knew, but there was a small chance of still getting to see a Bryde's whale.
Whilst I didn't really expect to find one (and we were eventually left without the sight of any), I was anxiously hoping for another species to appear: that was the resident Indian Ocean Humpback Dolphin. Whilst chatting with the guide, it was clearly recognizable that he couldn't really share my excitement for the species, still he did a whole effort trying to locate the pod which was frequently spotted in the area we were now moving in.
And then, when I was about to accept the fact of us soon having to set course for the beach, a glimpse of a dolphin's back appeared not far ahead of us! Humpback dolphins don't live in large pods, often one will see just a few individuals swim together, whilst it could as well be one on its own only. Also, they are extremely shy and generally staying away from boats and people (which is the reason the guide wasn't really understanding my thrill and hope of spotting them).
Anyways, I was happy about that back! It sure was a humpback dolphin and I didn't expect anything more, after all, now I had seen one! Never did I imagine that seconds later, five of them would approach and circle our boat, check us out quickly before then continuing their way as if all this had never happened. Gone they were and we took off for the beach - exercising a real James Bond landing to actually get back on land (I am serious: there is no harbor, no anchor points - just a beach and the boat has to get back onto it by its own power). 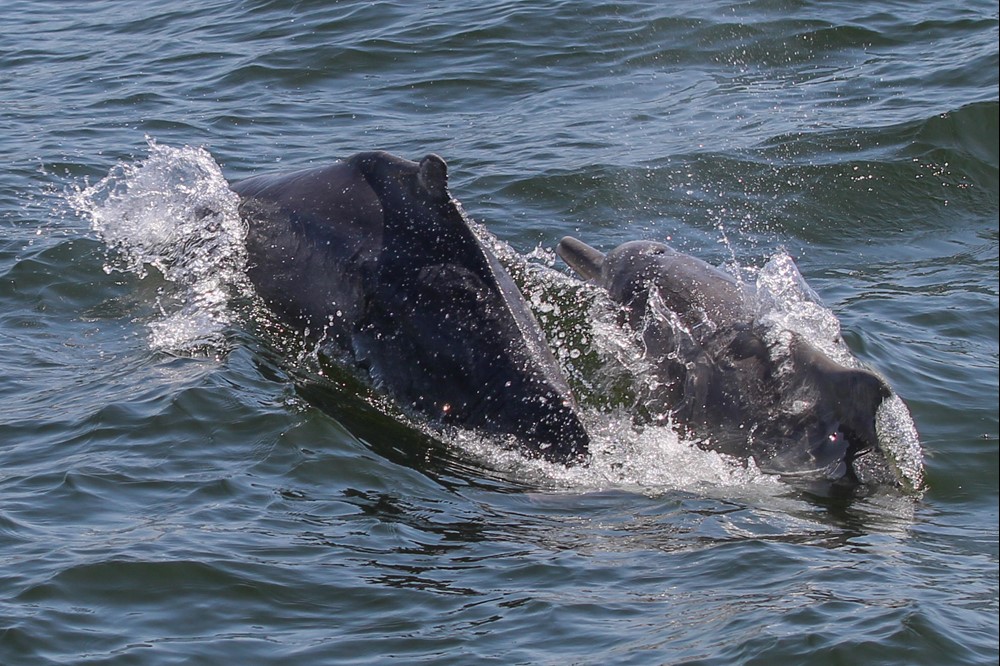 Two of the humpback dolphins: we couldn't have been more lucky about the outcome of our encounter - and to top it all, even a calf travelled alongside the others. As we sailed along Robberg Peninsula, a huge colony of African Fur Seals accompanied the vessel. In contrary to the humpback dolphins, bottlenose dolphins are very curious about the ongoings on the water and therefore stayed in the vicinity of the boat for a longer while. More than once they'd swim up to the boat to get a glimpse of us humans onboard. Bottlenose dolphins often travel in large pods. Way over a hundred individuals were surfacing all around us.

When is the best time to see whales?

Find out in our FAQ