Gentle Giants Whale Watching employs people from places all over the world. Some of our staff members are students who come to spend their summers in Húsavík to earn money, while at the same time being able to see and enjoy whale sightings every day. Many of them work with us for multiple seasons and some even find home in Húsavík. One of those former students is Dr. Charla Basran, even though she already had a master’s degree when she joined us back in 2014.

Charla grew up in British Columbia, Canada and as long as she can remember she's had a soft spot for whales and orcas. Her parents recently found a journal from when Charla was 7 years old and in that journal she had drawn an orca. That drawing was probably inspired by the movie "Free Willy" which had ignited Charla's passion for whales even more.

Many kids don't know what they want to be when they grow up, but, not surprisingly, Charla already knew at young age. When she was in 4th grade she learnt what a marine biologist is and that's when she knew she wanted to become one too.

She started her Marine Biology study at the University of British Columbia on the Kelowna campus and then went onwards to Vancouver Island to finish her bachelor's degree.

Charla ended up moving to Iceland after she had seen – and responded to an advertisement placed by a research centre in Iceland's beautiful Westfjords. The research centre was looking for students to join an International Marine & Coastal Management Program. This program does not only look at the scientific aspects of marine & coastal research, but also at the economical and financial side.

Charla applied successfully and started the program in 2012. Charla did her fieldwork in Húsavík where she worked on entanglement and scars analysis out in Skjálfandi Bay. To achieve accurate results, she followed a protocol for whale body analysis that was developed in the USA. She also used photo ID methods to study individual whales and took photos from humpback whale tails, dorsal fins and sides of the bodies for further scars analysis. In 2013 Charla received her Marine Resource Management master's degree.

In 2014 Charla started guiding for Gentle Giants, but at the same time she also considered a doctoral study and continue her entanglement and scars research. Gentle Giants supported her in this and helped Charla with a flexible work schedule so she could combine both her guiding – and research work.

Charla wrote a PhD. proposal in which she focussed on monitoring and mitigating humpback whale entanglement and she aimed to do this for the whole of Iceland. Scars analysis formed the foundation for her research and as such Charla cooperated with all whale watching companies in Iceland in order to collect as many photos as possible.

Charla was able to analyse 379 individual whales and concluded that as many as 25% of the studied whales had been involved in entanglement situations. Thankfully all these whales survived their ordeals.

25% is a high percentage and to bring this number down, or at least stop it from further increasing, Charla tested so-called whale pingers. These devices make a 3 KHz beeping sound and should basically warn whales that there is something ahead of them that could cause them harm. These beeps are targeted to be annoying sounds and should thus lead the whales away from it. When deploying and recollecting the pingers, Gentle Giants provided captains and equipment such as boats and gear to help Charla execute her PhD. field research program.

The whales clearly reacted to the deployed pingers. A change in behaviour was seen when whales came closer to the pingers and the number of whales swimming into fishing nets decreased significantly. The amount of surface feeding time decreased, whereas an increase in calculated swimming speed was registered as well. These were very promising results as it was clear that the whales hear, and react to the beeping sounds.

A full pinger program was then conducted in the capelin fishing industry. Often whales end up in the nets once the fishing vessels start bringing them in. Whales then get trapped and damage the nets as they try to get away. This is a nuisance for the fishermen and a life threatening situation for the whales, so when the test proved to be successful everybody was very excited. With one test they also used pingers inside a net to help a whale find its way out. There were no pingers at the exit of the net and so they were able to guide that whale finding its way out unharmed.

The same pingers are used in Australia and Alaska, but with no defining results yet and in that sense Charla's field experiment proved to be successful and groundbreaking.

Charla's research conclusions led to a number of recommendations to further decrease whale entanglements. One of them is to open a hot line where entanglements can be reported, as today there is no reliable data on how many entanglement incidents take place every year in Icelandic waters. Another recommendation is to start implementing the usage of pingers in the fishing industry so fishermen won’t have to keep repairing their nets and the whales will not end up being trapped inside them.

Now that Charla successfully achieved her PhD. you might think that she's enjoying a well-deserved vacation, but that is not the case. She continues her whale research in Húsavík and her next project is already getting shape. Her goal is to continue to analyse the effects of pingers on whale behaviour and for this project she wants to use suction cups to see the effect on whale behaviour underwater. That should provide even more accurate data and could help to improve the efficiency of the pingers. Charla will apply the suction cups herself and her target is to attach them to 10-12 whales over a number of years.

If you want to contribute to Charla's research then you're welcome to submit photos from whale watching tours on the following link.

In the future Charla is hoping to work in the whale breeding grounds and study the same whales that we can see here in Skjálfandi Bay. Some of the whales migrate to Puerto Rico and Dominican Republic and by means of photo ID it would be ideal to study them and see how they behave in a totally different setting with different behaviours. Charla is simply keen to see them on the other side.

Charla has been living in Húsavík for many years now and she still occasionally joins Gentle Giants to guide our whale watching tours. She enjoys life in Iceland because its nature is beautiful and easy accessible, there are no big cities, it is very quiet and of course there are whales.

Charla has one last tip for our guests; be prepared for any type of weather and don't let bad weather affect your experience because bad weather is simply part of the Icelandic experience!

We'd like to wish Charla all the best with her future endeavours and of course we hope she'll continue to work with Gentle Giants and share her incredible whale knowledge with our guests as well. 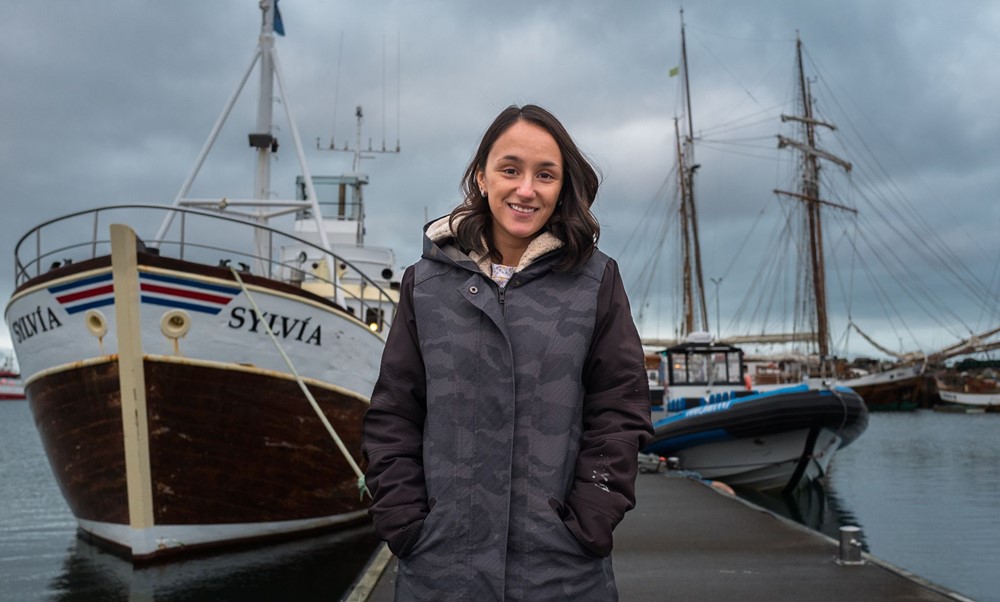